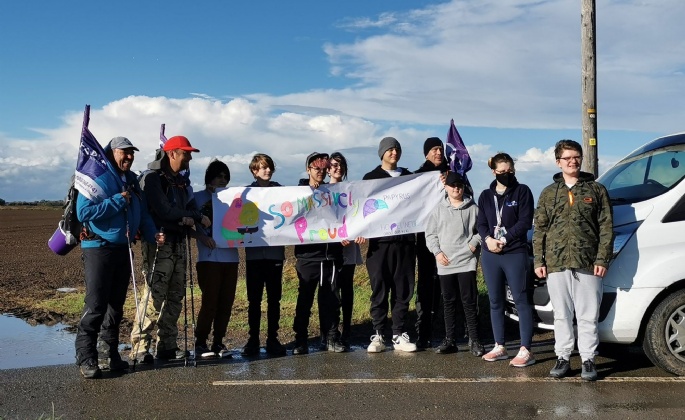 Pupils from the Pilgrim School in Amber Hill put their best foot forward to meet up with three bereaved fathers who are hiking 300 miles to raise awareness of suicide prevention.

A group of seven pupils and three staff from the hospital school met the 3 Dads Walking as they passed by on their trek from Cumbria to Norfolk. The three dads – Andy Airey, Mike Palmer and Tim Owen – were left devastated when their daughters Sophie, Beth and Emily took their own lives, and they have taken on the epic walk to raise money for Papyrus, which campaigns to prevent young suicide. So far their walk has raised over £330,000 – including a £10,000 donation from James Bond actor Daniel Craig. They aim to finish the journey in Shouldham, near King’s Lynn, on Saturday October 23.

The Pilgrim School supports children and young people with both physical and mental health needs which prevent them from attending their mainstream schools. Students and staff have been learning about and raising money for Papyrus all week with a range of activities including Halloween fancy dress. So when they realised the 3 Dads would pass close to the Amber Hill base on their route, pupils from the school’s Duke of Edinburgh Award team decided to pull on their walking boots and meet up with them.

“It was fantastic for our students to join up with the 3 Dads and give them a cheer,” said Dave Anderson, the school’s DofE leader. “The students have been incredibly supportive of Papyrus throughout the week, and like everyone else they were immensely moved by the story of the three dads and what they have been through. So they were really eager to go and meet them.

“The dads were fantastic. They must be absolutely shattered after 12 days on foot, but they made time to chat to the students. Together they will spread the vital message that the more we encourage people to talk openly

about suicide and mental health, and to reach out for help, the more lives can be saved.”

Suicide is the biggest killer of young people under 35 in the UK, and Papyrus believes that many young suicides are preventable. They operate Hopeline UK, a confidential call, text, and email helpline for young people with thoughts of suicide or those concerned about a young person who may have thoughts of suicide. Steve Barnes, headteacher of the Pilgrim School, added: “Papyrus is really close to our hearts because suicidal thoughts and self-harm are closely linked with mental health issues such as depression and anxiety. These are issues that can affect all young people, not just those at Pilgrim and other hospital schools, so we are hugely proud of how our students responded to the 3 Dads and their awareness campaign.”